Amitabh Bachchan is at present in Manali shooting for the climax scene of film Brahmastra, Direced by Ayan Mukerji's. Big B with Ranbir Kapoor and Alia Bhatt for the next few days will shoot and later will head to a foreign location in early December. As we know Big B is quite active on social media and often shares his views on his blogs or on his social media accounts.  In this series Big Bachchan shared a BTS picture with his Brahmastra co-star Ranbir Kapoor on micro blogging website.

He  wrote on his twitter handle, "T 3567 - ..minus degrees ..err like -3 .. protective gear .. and the work etiquette .." Amitabh Bachchan portrays the role of Ranbir's guru in the film. On his blog too Big B shared some cool pictures of his and wrote, "Meanwhile back in the forests of chilling work schedules .. work races on .. the tasks before us to complete in time and in work ethics, always a challenge in the creativity of film .. but regardless we build on ..Protection from the chill winds .. protection from the chilled breezed eyes .. in attendance with that work force that caters to each little need .. is quite quite remarkable, laudable and deserving of praise .." 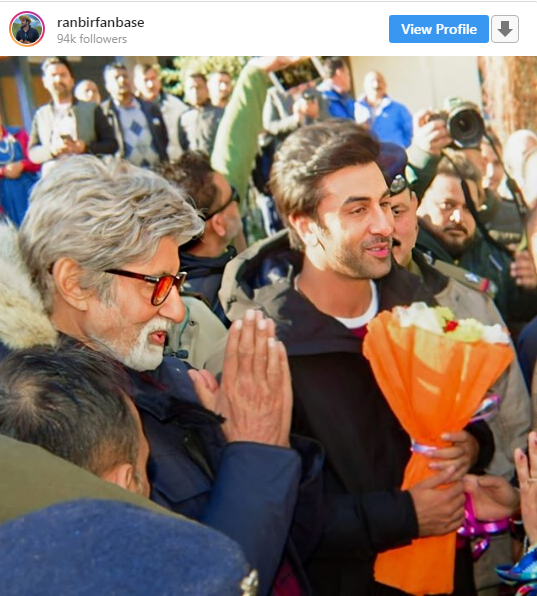 It is noted that Brahmastra also stars Nagarjuna Akkineni, Dimple Kapadia, and Mouni Roy. Previously the movie was scheduled to release this December but got pushed to Summer 2020. Brahmastra shows story of Shiva and Isha. Shiva played by Ranbir who can emit fire from his palms and the film’s first part will showcase his journey to discover Brahmastra. Earlier Brahmastra’s logo was launched in Prayagraj with 150 drones that lit up the sky astonishingly.

WBR London honours Kapil Sharma creating a record as one of the most viewed...