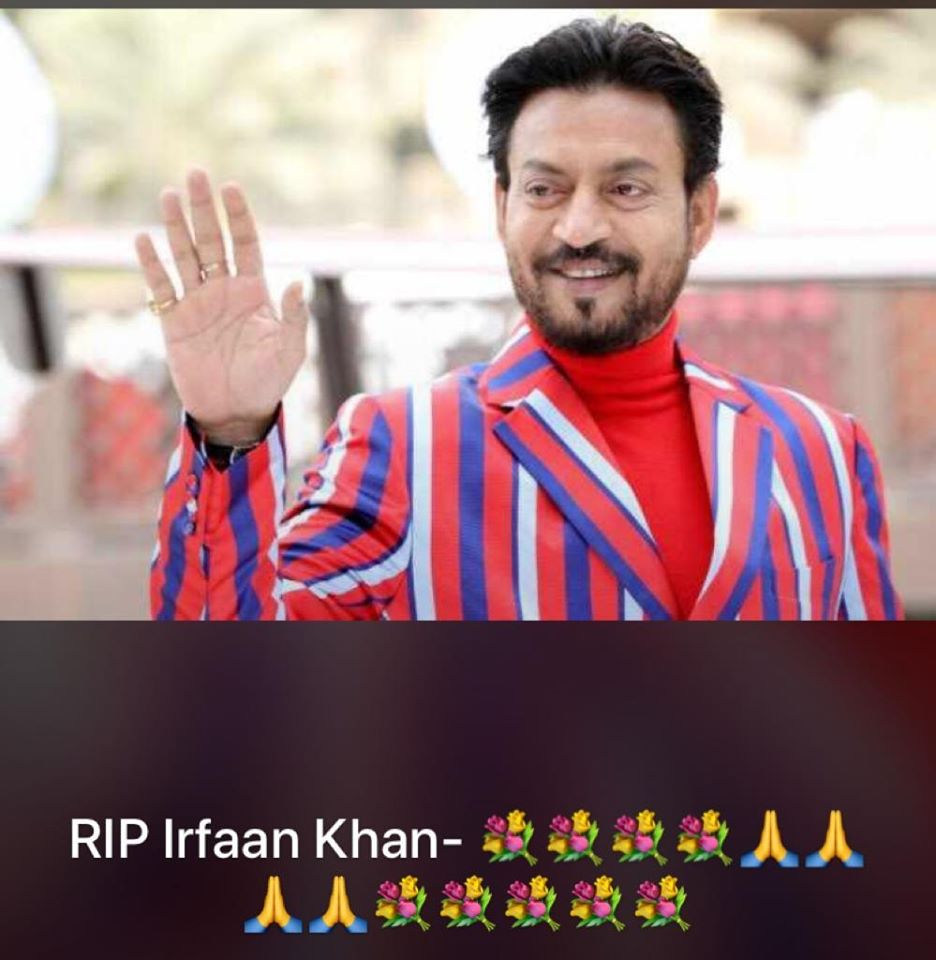 Hindi Cinema actor Irrfan Khan today took his last breath his  at Mumbai's Kokilaben Dhirubhai Ambani hospital. He was suffering from cancer .He was rushed to the hospital on April 28 evening. Due to his detroit condition, Doctors  kept him in the ICU .

Reports suggested that he was suspected of colon infection.

IrrfanKhan was known internationally for roles in Slumdog Millionaire, Life of Pi and Jurassic Park .He was aged 53.On Demise of English Medium actor condolences have been pouring across the Bollywood  including  Amitabh Bachchan .

T 3516 - .. just getting news of the passing of Irfaan Khan .. this is a most disturbing and sad news .. Folded hands

An incredible talent .. a gracious colleague .. a prolific contributor to the World of Cinema .. left us too soon .. creating a huge vacuum ..

My dear friend Irfaan. You fought and fought and fought. I will always be proud of you.. we shall meet again.. condolences to Sutapa and Babil.. you too fought, Sutapa you gave everything possible in this fight. Peace and Om shanti. Irfaan Khan salute.

Here is the  the statement released on behalf of Irrfan Khan's family:

"'I trust, I have surrendered'; These were the some of the many words that Irrfan expressed in a heart-felt note he wrote in 2018 opening up about his fight with cancer. And a man of few words and an actor of silent expressions with his deep eyes and his memorable actions on screen. It's saddening that this day, we have to bring forward the news of him passing away. Irrfan was a strong soul, someone who fought till the very end and always inspired everyone who came close to him. After having been struck by lightning in 2018 with the news of a rare cancer, he took life soon after as it came and he fought the many battles that came with it. Surrounded by his love, his family for whom he most cared about, he left for heaven abode, leaving behind truly a legacy of his own. We all pray and hope that he is at peace. And to resonate and part with his words he had said, 'As if I was tasting life for the first time, the magical side of it'."

He was diagnosed with an neuroendocrine tumour in March 2018, soon after which he flew to London for treatment. He came back to India in February 2019 to shoot Angrezi Medium and flew back to London after a brief stay. In September last year after surgery in London, he returned to India.

Unfortunately Irrfan Khan's mother Saeeda Begum passed away at the age of 95 on Saturday morning in Jaipur. According to news agency ANI,  and NDTV Irrfan, who couldn't travel from Mumbai due to the Covid-19lockdown, paid his last respects to his late mother through a video conferencing session.